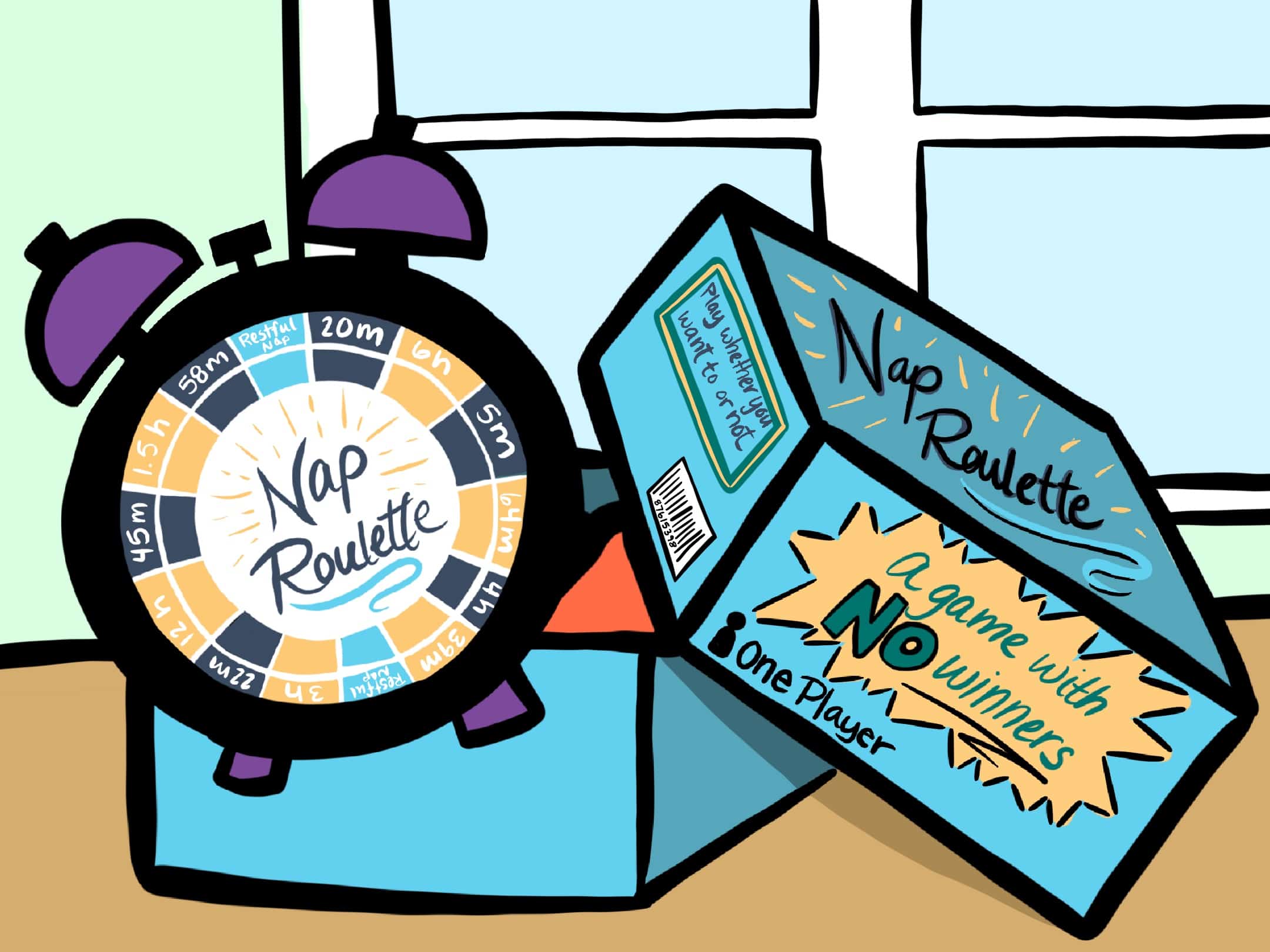 My family and I love to play games. One of the first things my husband and I bonded over was board games. We used to go to friends’ houses on Friday nights and play together. The joy of learning a new game was something we quickly began passing on to others, and we now play games with our children at home. We love board games like Settlers of Catan and Carcassonne and card games like Dominion and Dutch Blitz. But the game I play most often is a game I have to play alone: Nap Roulette.

I haven’t always been into Nap Roulette. In fact, as a child I never played it. My childhood was spent outside in the dirt, playing tag and climbing trees with my siblings and my cousins. I enjoyed reading and school. As a student, I rarely had difficulty with my studies, but during my junior year of high school, something began to shift. The first time I noticed something was different, I was in social studies class. We were gathered around an old television, the kind that hangs from the corner of the room and honestly looks far too heavy to be positioned there. As I leaned forward on my desk, I became overwhelmingly sleepy—the kind of sleepy that makes you want to crawl into bed, flip all the lights off and tune out the entire world. I struggled to keep my eyes open, but fell asleep right there in front of the television, my chin resting on my hands. My head eventually slipped off my hands, and the jarring sensation jolted me awake. I felt so frustrated and embarrassed.  I had no idea how long I had been asleep, didn’t feel remotely refreshed, and just hoped no one had noticed. 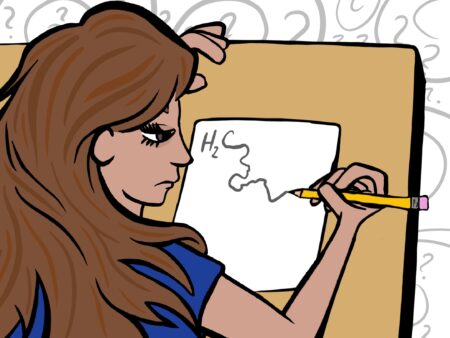 I wish I could say that was the only time I felt overcome by sleep, but quite the opposite was true. I found myself struggling more and more every day. In one particularly memorable moment, I fell asleep while taking a chemistry exam. I had no memory of actually falling asleep, but upon waking I saw that I had long pencil lines across my paper—almost as if I had just fallen asleep mid-problem and dragged the pencil with me as I laid my head down on the desk. Miraculously, I passed chemistry with an A. I still like to joke that maybe I should have become a chemist, since I could sleep during a test AND pass the class. In truth, I didn’t give a lot of thought to the sleepiness. I just assumed that maybe I wasn’t sleeping enough at night, and promised myself I would go to bed earlier. In actuality, I was getting plenty of sleep. I went to bed relatively early, slept in as late as I could, and on weekends I always made sure to make extra time for a nap or two.

In 2001, I graduated high school and started college at Western Michigan University. The freedom to pick my own schedule and courses was something I craved, and I was so excited that I could choose to start my classes later in the day! I made a promise to myself I would never sign up for an 8am class, and am happy to say I kept that promise. I thought if I attended classes later in the day, I would be safe from the ever-present need to sleep. Turns out, that wasn’t true. Not only could I fall asleep during a 5pm lecture on ecology, but I could also sleep through more exciting activities, like films in movie theatres, concerts, and live theatre performances. The worst part of all was that my grades began to suffer. During my sophomore year of college, I more or less slept through the entire semester. I began skipping classes, and could usually be found passed out on my dorm futon, the door to my room wide open for everyone to see. I suppose it looked like maybe I was just out partying all the time and needed to sleep through the day, but that was definitely not the case. I was just so tired. 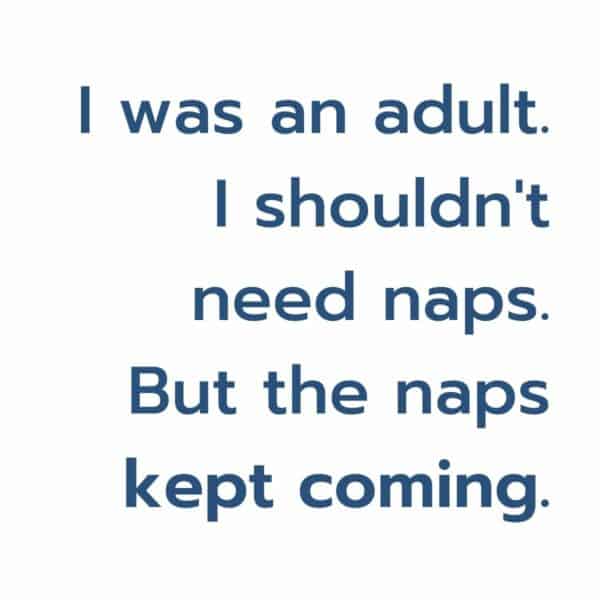 When I would come home from college, my siblings got angry with me when I insisted that it was my naptime. My sister and I loved to play board games when I came to visit. Monopoly, Life, Clue — the classics.  The image of my sister, standing in the kitchen holding the Monopoly game, disappointment stretching across her face when I needed to sleep instead of playing with her, is forever burned into my brain. This was often the reaction others gave me; I was an adult, I shouldn’t need naps. So instead of getting help, I just got better at hiding it. But the naps kept coming.

What Is Nap Roulette?

After I got married, when my first child was a newborn, Nap Roulette became an officially acknowledged part of my everyday life. Nap Roulette is the act of taking a nap and not knowing how long it will be. Will it be twenty minutes? Two hours? Will I wake up refreshed and ready to continue my day, or will I be even more exhausted and need to keep sleeping? I never know, but I spin the Nap Roulette wheel at least once a day. I never set an alarm, because there is no point; if I do set an alarm, I usually fall back asleep anyway. Truthfully, there are no winners in Nap Roulette.

On one particularly jarring evening, I fell asleep after dinner while watching television with my husband. When I woke up I was so confused, and suddenly very concerned, because all was quiet, the house was dark, and my daughter was nowhere to be found. I shot up out of the recliner, and my husband calmly responded that he had put our daughter to bed, and it was bedtime for us also. I know many people would probably not be able to sleep if they woke up from a nap right before bed, but my words that night have become a bit of a catch phrase in our house. I smiled and replied, “I love it when I wake up from my nap and it’s time for bed!”

As time progressed, life continued to change around me. I had been teaching since 2006 but swapped around grade levels, eventually landing in the middle school science classroom. I moved across the country (twice!), and had a second child. Life kept moving, but was punctuated by my need to spin the Nap Roulette wheel at least once a day, and sometimes much more frequently. I still did not understand what was causing this excessive need to sleep. My husband and I would joke about how I could sleep for twelve hours at night, wake up and eat breakfast, then take another nap, but in reality it wasn’t a joke. That was my life, every single weekend. During the week when I was working, I would somehow manage my sleepiness during the day by taking short naps when I could, walking around during a meeting, or drinking a zillion cups of coffee. My husband would be the one to get up with the baby and take care of him in the morning so I could get some extra sleep. Our whole lives were run by my need to play Nap Roulette. 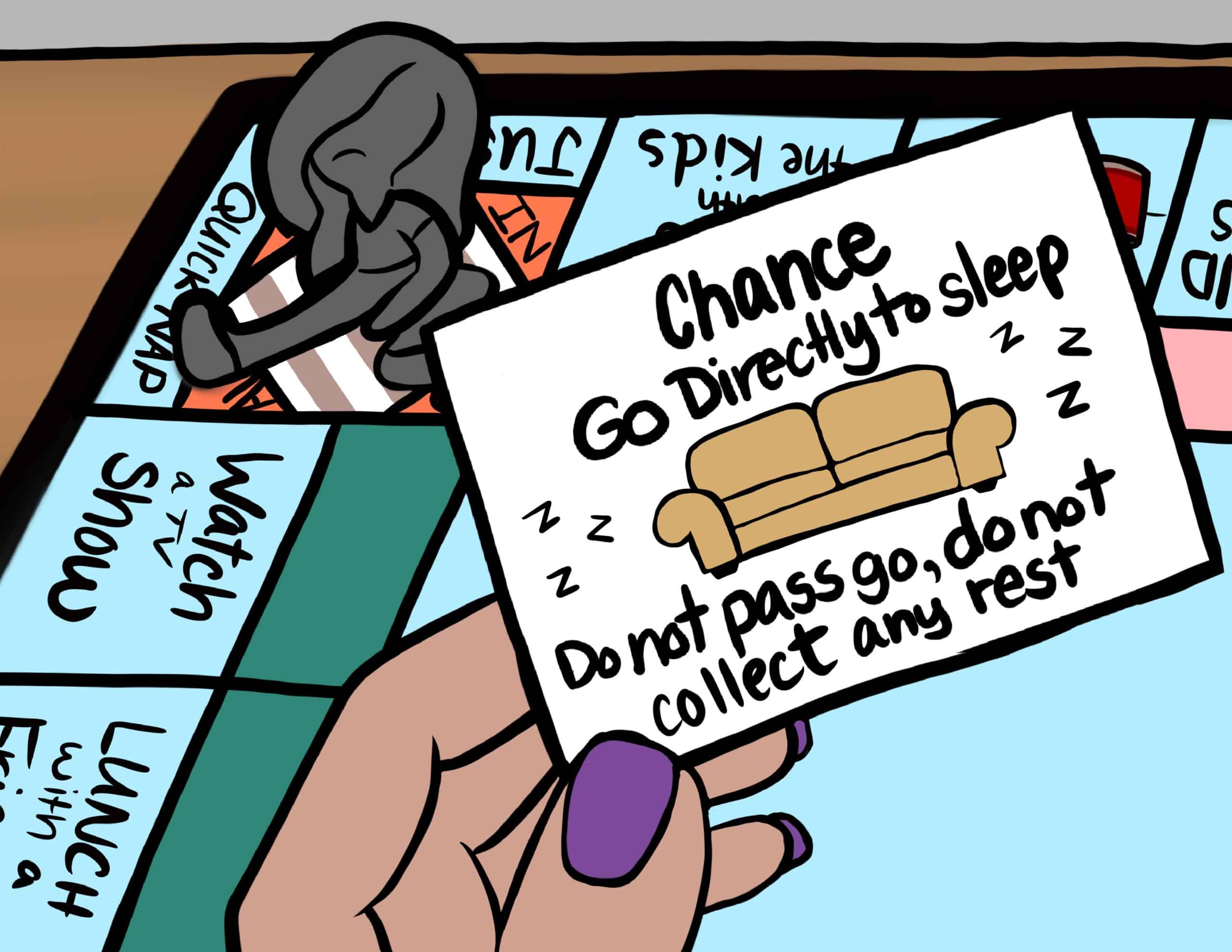 Twenty one years after the day I fell asleep in social studies class, I finally got a referral to see a sleep doctor. I was 36 years old, and had been living with excessive sleepiness for so long, I was convinced that it was just part of who I was. Thankfully, my neighbor and good friend gave me the tools to be persistent and stand up for myself.

It was a tough road to get the referral.  My primary care physician knew about my sleepiness, but it never felt like something she took seriously.  She ran tests for my thyroid, gave me a depression questionnaire, and at one point suggested it was all because I was a teacher and a mother. I pointed out to her that lots of people are teachers and mothers, and this sleepiness had started long before either, but she shrugged it off. My interactions with her left me feeling helpless, and made me question if what I was feeling was real. 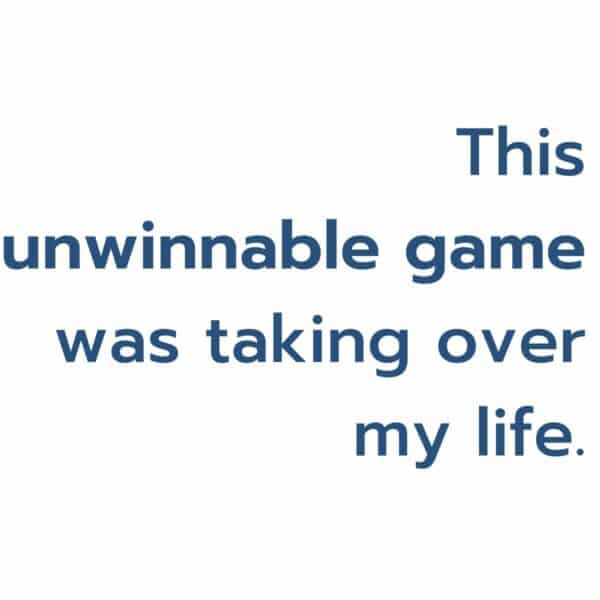 I felt like my whole family was doing things without me, and there was nothing I could do about it. They got to play games together, read books, and just enjoy each other’s company. I, on the other hand, seemed to spend all of my time playing Nap Roulette, sometimes two or three times a day. This unwinnable game was taking over my life, and it didn’t seem like I would ever find a way to beat it. In the end, it was not my primary care physician who referred me, but another doctor I had to see when my PCP was unavailable.  I had gone in for an issue relating to a skin rash, and left with not only a solution to that but also a referral to sleep medicine.

After a sleep study, an actigram (a wristwatch-like device you wear for two weeks to track your sleeping habits), and several meetings with the sleep doctor, I was officially diagnosed with idiopathic hypersomnia with long sleep time. Idiopathic hypersomnia is characterized by excessive daytime sleepiness and the need to sleep for long periods at a time, but never really feeling refreshed. This was me! This was it. I was so relieved; it confirmed that something serious was happening, and it also meant that there were some treatment options. After 21 years, I finally had my answer to “Why?”

And just like that, everything got better! Not really, but I like to pretend that is true. There is no cure for idiopathic hypersomnia, but I now take a combination of daytime stimulants and a nighttime medication.  These medications allow me to get an appropriate amount of sleep at night while still feeling like I can function during the day.

I still play Nap Roulette, but I don’t feel like the game controls my life anymore. I understand it is part of my life, and embracing it with a good attitude and, yes, even a sense of humor every now and then will get me a lot further than resenting it. My family might not play Nap Roulette, but they are learning the rules of it. I may never win a game of Nap Roulette, but not having to play so frequently has allowed me to add some games into my rotation that I actually can win. I’m the current Dutch Blitz champion in the house, and I don’t see my winning streak coming to an end any time soon. 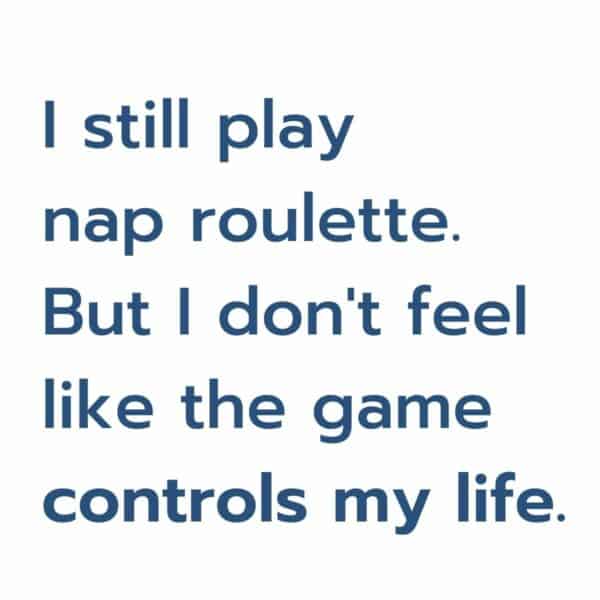 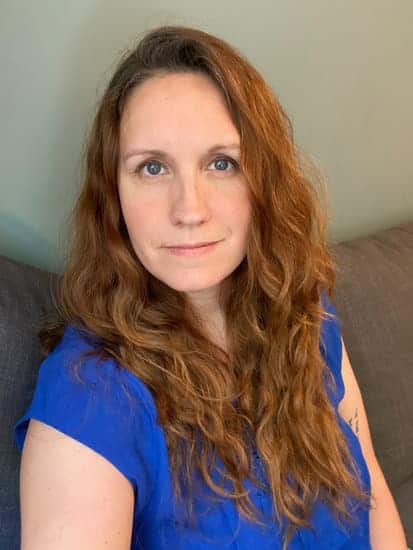 Mary Murray is a teacher, mother, avid reader, and lover of travel living in Los Angeles. She was diagnosed with idiopathic hypersomnia at the age of 36. As a Rising Voices of Narcolepsy advocate, she hopes to help others understand what it’s really like to live with this rare disorder. Connect with Mary on Instagram at @theunsinkablemarymurray.

Brandi Wheeler (aka Juno) began sharing art online in 2020 as a way to bring attention to the things that matter to her. Since receiving her narcolepsy diagnosis in 2021, Brandi’s art has included sleep disorders awareness and insight into her own journey. She lives in Southern California with her family, where she enjoys an insane amount of delicious vegan food. Connect with Brandi on Instagram at @stardustbyjuno.

About Rising Voices of Narcolepsy

To improve public understanding of narcolepsy, Project Sleep’s Rising Voices of Narcolepsy program trains people with narcolepsy to share their stories through public speaking and writing with local communities, healthcare providers, news outlets, blogs and beyond. Combining the power of real-life stories with expert communication strategies, our Rising Voices of Narcolepsy trained speakers and writers are effectively raising awareness and reducing stigma for all those facing narcolepsy.