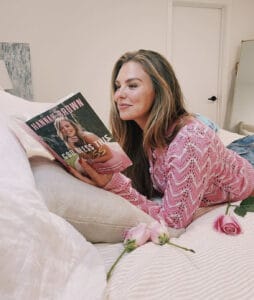 As Bachelor Nation digs in to read former Bachelorette Hannah Brown‘s new book God Bless This Mess: Learning to Live and Love Through Life’s Best (and Worst) Moments, readers may be surprised to learn that Hannah Brown is a person living with narcolepsy.

God Bless This Mess hit bookshelves on November 23, 2021, offering Hannah a platform to tell her story on her own terms. In addition to behind-the-scenes stories from her days on The Bachelor, The Bachelorette, and Dancing with the Stars, Hannah shares about a formative family tragedy from her childhood – the violent murders of her aunt and two young cousins. 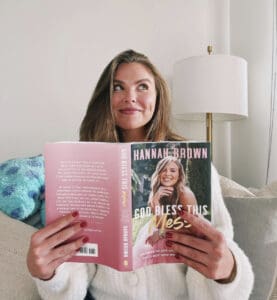 Hannah speaks about the impacts this terrible family tragedy had on her life and, within this context, describes having “terrifying dreams” almost every night. She writes:

I started waking up in the middle of the night in a cold sweat, believing fully that someone was at the door to hurt us. I wasn’t scared of monsters under my bed; I was scared of someone being in my closet, sneaking into my window, breaking through our front door to kill my family. Not a monster. A man.”

Hannah’s description will likely resonate with many people with narcolepsy, as feelings of intruders and attackers coming into one’s sleeping space are common experiences for those living with narcolepsy. These are known as hypnagogic hallucinations and sleep paralysis.

What are hypnagogic hallucinations and sleep paralysis?

Many people with narcolepsy describe waking up to feel a presence, a shadowy figure, attacker, or burglar in the room or home.  Learn more about these “night visitors” in the video below and here.

Brown goes on to reveal that her challenges with sleep did not end in childhood, and ultimately, she was diagnosed with narcolepsy a few years ago. She writes:

A few years ago I was diagnosed with narcolepsy, which isn’t the joke they make it out to be in TV comedy shows. It doesn’t mean I fall asleep mid-conversation or plot my head on a table and go out cold in the middle of dinner. It means that even when I think I’m getting a full night’s sleep, I’m not. I never get the deep sleep that humans need to feel fully rested. So I’m tired pretty much all the time.”

Well said! Brown’s description of “being tired all the time” but not necessarily falling asleep mid-conversation will resonate with many people with narcolepsy and may help those undiagnosed to better identify their own symptoms.

Excessive daytime sleepiness is the most universal symptom of narcolepsy, causing  periods of strong sleepiness during the day comparable to how a person without narcolepsy would feel after staying away for 48-72 hours straight. However, this sleepiness is often invisible, even when impacting cognition, mood, and memory.

Narcolepsy is a neurological disorder of the sleep/wake cycle affecting 1 in every 2,000 people, or 200,000 Americans and 3 million people worldwide. Symptoms include excessive daytime sleepiness, hypnagogic hallucinations, sleep paralysis, disrupted nighttime sleep and a unique form of muscle weakness called cataplexy.

While narcolepsy is not all that rare, it is rarely diagnosed, with the majority of people living with narcolepsy currently undiagnosed. This is why a celebrity like Hannah Brown sharing her experience with narcolepsy is invaluable to increase public awareness.

In God Bless This Mess, Hannah ponders what might’ve caused her narcolepsy, writing:

They say the causes are biological. Maybe hereditary. But part of me can’t help but wonder if it’s caused by fear – if my narcolepsy is a direct symptom of the trauma of the murder itself.”

Scientists are still working to uncover why there is a loss of orexin-producing neurons in people with narcolepsy, but it is likely a combination of genetic and environmental factors. Less is known about the causes of type 2 narcolepsy without cataplexy. Learn more about the science of narcolepsy.

Was this the first time Hannah Brown revealed her narcolepsy diagnosis?

This book offers the most definitive statement about Hannah’s narcolepsy diagnosis, however Hannah briefly mentioned having narcolepsy during an Instagram Live video in November 2019, and again in October 2020 during the “What Really Happened” YouTube video at the 9:10 mark, when she matter-of-factly mentions:

Driving, it was like 13 hours back, and I have narcolepsy so I can’t really drive by myself.”

Hannah Brown is not alone in being a celebrity living with narcolepsy, she is not even the first Bachelor Nation star or Dancing with the Stars contestant to have narcolepsy!

Bachelor in Paradise star, Katie Morton, has opened up about her experience living with type 1 narcolepsy with cataplexy in several articles and interviews, including this article on The Mighty and in a Good Morning America interview.

Further, ABC News’ Chief Meteorologist, Ginger Zee is also a person with narcolepsy and a popular contestant on season 22 of Dancing with the Stars in 2016. Zee shared about her narcolepsy diagnosis in her book, Natural Disaster: I Cover Them. I am One. 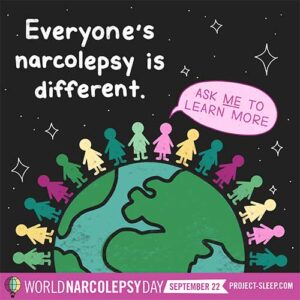 “Project Sleep believes that real-life accounts such as Hannah Brown’s memoir and our Rising Voices of Narcolepsy storytellers offer invaluable educational tools to reduce stigma and to reduce unacceptably long delays to diagnosis,” said Julie Flygare, JD, President & CEO of Project Sleep. “Each person’s experience with narcolepsy is different and every voice matters, which is why we are so grateful to Hannah for using her platform to raise critical narcolepsy awareness. We are sending her wakefulness and huge congratulations during this exciting moment in her journey.”

If you or someone you love thinks they could be experiencing possible signs or symptoms of a sleep disorder, it is important to consult an AASM board-certified sleep disorders specialist in your area. You can start by finding a local accredited sleep center here.